b Department of Oral Pathology and Medicine, School of Dentistry, University of Chile. Santiago, Chile

An ectomesenchymal chondromyxoid tumor (ECT) is a rare intraoral tumor that should be included in the differential diagnosis of other mesenchymal tumors, particularly when located in the tongue. This study reports a new case of a 34-year-old female patient with a nodular lesion on the tongue dorsum. Its clinical diagnosis was irritative fibroma. The lesion was surgically removed, and, after 2 years of follow-up, no recurrence was observed. A detailed description of the histomorphological and immunohistochemical features of the ECT was made, highlighting the high Ki-67 proliferative index observed.

An ectomesenchymal chondromyxoid tumor (ECT) is a benign mesenchymal tumor composed of cells that phenotypically resemble myoepithelial cells.1 Approximately 75 cases of ECT were published in English in the literature.2-4 The tumor manifests as a submucosal nodule on the back of the tongue or, less frequently, at the base of the tongue and palate.2,5 The ECT is usually small, ranging from 4 to 50 mm,2 has no gender predilection, and affects patients between the first and eighth decades of life.1, 2, 6, 7 Surgical excision is indicated as treatment, and the prognosis is excellent, with a recurrence rate between 1.8 and 7%.2, 7

Histologically, the ECT is a well-delimited but not encapsulated tumor.1, 5, 8 The tumor consists of round, spindle-shaped, polygonal and oval cells2 arranged in cords and sheets or forming a reticulated pattern within a myxoid or chondromyxoid stroma.1 Atypia and multilobulated nuclei are also observed.

The aim of this study was to report a case of ECT in the oral cavity, highlighting its histopathological and immunohistochemical features.

A 34-year-old female patient had an asymptomatic lesion on the anterior dorsum of the tongue. The nodular lesion measured 1.5 x 1.3 cm, had a sessile base, well-defined limits, normal mucosa color, smooth surface and was firm to touch.

Upon a clinical diagnosis of irritation fibroma, an excisional biopsy was performed. The histopathological examination showed a well-delimited nodular lesion that pushed the striated muscle tissue, discretely surrounding it (Figures 1A and 1B). The lesion was characterized by lobules that were slightly intersected by fibrous septa (Figure 1A). The lobules exhibited frequent myxoid, chondroid and myxochondroid areas, as well as more solid areas composed of small, oval/round and hyperchromatic cells (Figures 1AC and 1D). Other areas were composed of polygonal or elongated cells with eosinophilic or vacuolar cytoplasm (Figure 1C). In addition, there were microcysts and dilated cystic spaces, sometimes with an arrangement similar to myxoglobulosis, filled with recent red blood cells (Figure 1D). Pseudoinclusions were also observed, and atypia was discrete. The histopathological features indicated the diagnosis of ECT. The deep surgical margin was focally compromised, and no neural or vascular invasion was found. 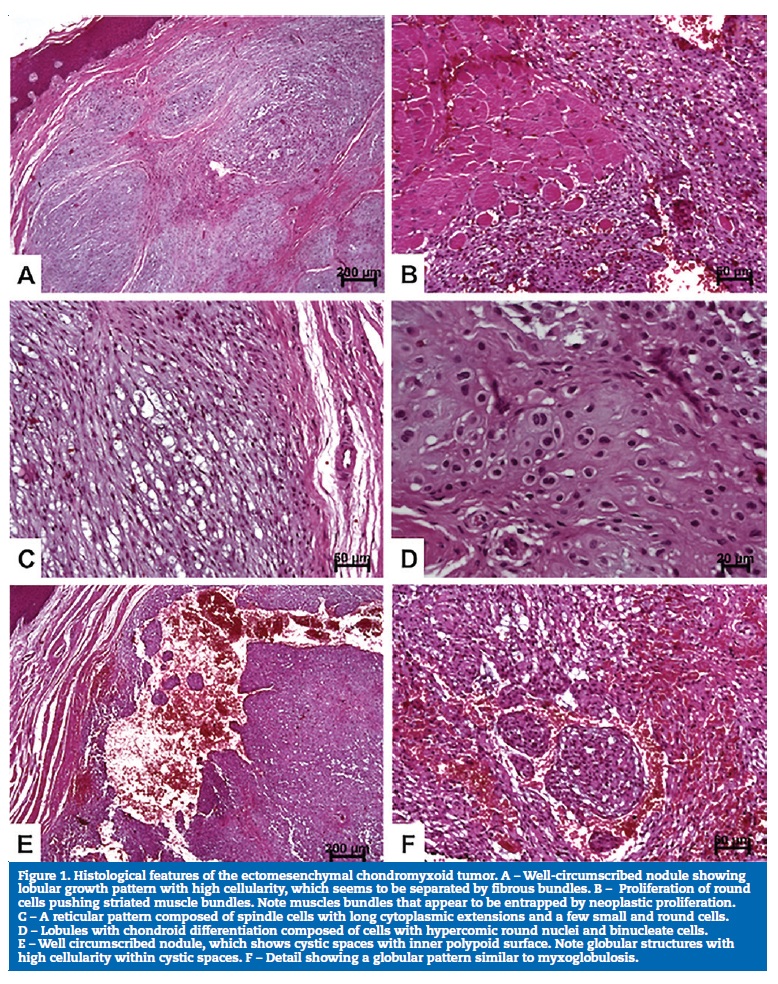 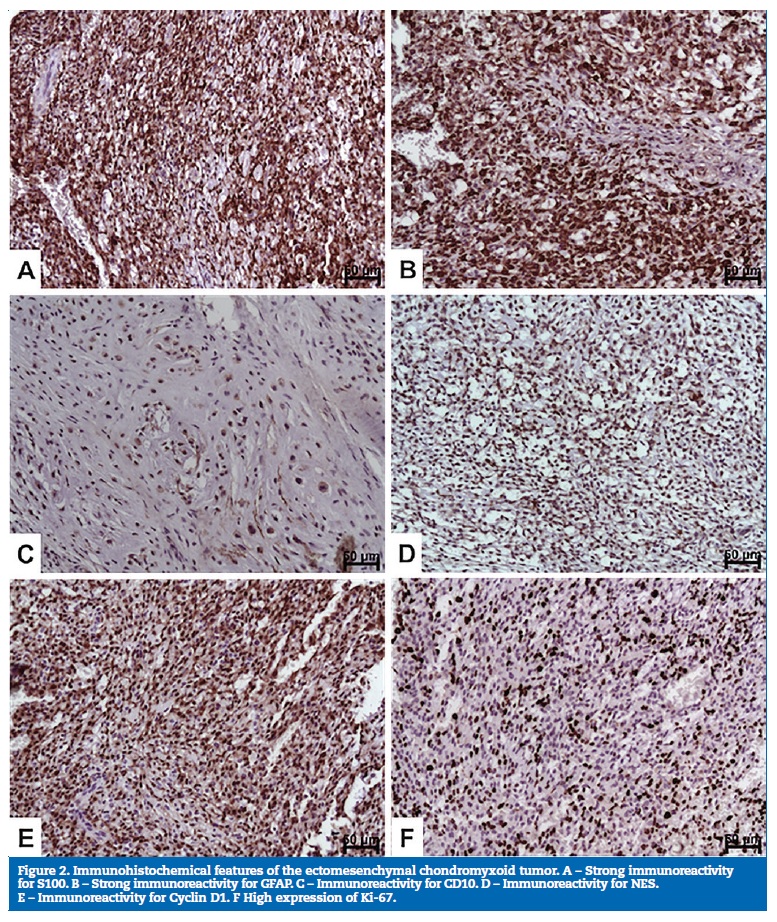 Although the WHO describes the ECT as a rare benign mesenchymal tumor with a myoepithelial cell-like phenotype,1, 10, 11 there is unanimous agreement that this tumor arises from neural crest cells.5,8, 12,17 The clinical features of the present case are consistent with those reported in the literature, which describe the ECT as an asymptomatic lesion that usually measures less than 2 cm in diameter, is located on the back of the tongue and affects patients at a mean age of 34 years.1 2, 5, 6, 8, 11, 12, 18, 19

Histologically, the present case meets the morphological criteria for the diagnosis of ECT.2, 4, 6, 8, 11, 15, 16, 17, 23 The tumor is characterized by a lobular growth pattern with cystic spaces and stroma with myxoid, chondroid and myxochondroid areas, and by hypercellularity – especially small cells, which seem to predominate in ECT.5 Another particular feature is neoplastic cells surrounding muscle cells,5 15 16 24 but this does not seem to represent evidence of an ECT’s aggressive behavior.22 The atypia found was discrete, but some authors speculate that these areas might be associated with inflammation secondary to stimuli or aging of the tumor.16, 18 It is important to state that we also detected globular structures, described as myxoglobulosis.24 These structures were also seen by our group in oral mucoceles.25

The immunohistochemical profile of ECT is highly variable. However, as in previous studies, the present tumor was positive for S100 and GFAP,4, 6, 7, 12, 15, 19, 23, 26, 27 demonstrating an origin from the neural crest, as well as for CD10,28 NSE20,29 and cyclin D1.4,17,28 Regarding this last protein, strong nuclear expression was detected, but no translocation of CCND1/IGH or amplification of the CCND1 gene was found.28 No CD56 staining was observed, which is in agreement with a previous study21 that reported a variable expression of this marker in its cases.

Other differential diagnoses are myxoma, mucocele, oral focal mucinosis, neurofibroma, and schwannoma.2, 5, 7, 8, 12, 17, In the present case, the histological features, together with the immunohistochemical findings, helped to make this distinction since the absence of AE1/AE3 and the presence of neural markers indicated a tumor of ectomesenchymal origin.

Although rare, the ECT should be included in the differential diagnosis of nodular lesions that occur on the dorsum of the tongue. To our knowledge, this is the first case report showing a high proliferative index. Since little is known about the evolution of this tumor, the patient is monitored closely.