Keratoacanthoma (KA) is a rapid growth tumor characterized by its composition of well-differentiated keratinizing squamous cells, which originate from the pilosebaceous follicles, and its etiology is not identified. 1, 4 It is commonly presented as a self-limiting lesion and has strong clinical and histopathological similarities with squamous cell carcinoma. 2, 3, 6

Head and neck KAs are common and account for around 70% of all KAs. 1, 3 Classically, the lesion is presented as a domeshaped nodule with an ulcerated crater in its center.6 Giant KA is a rare variant of KA with a size exceeding 2 cm. 1, 7 It has a main predilection for the nose and eyelid as primary sites8 occurs more commonly in men, and most of the lesions are observed in sun-exposed skin. 1, 4, 6

The aim of this work is to analyze the clinicopathological characteristics of the head and neck keratoacanthoma by reviewing all the case reports and clinical series previously published in English and reporting a rare new case in the lower lip.

A 64-year-old male patient was referred to the oral pathology service of the João de Barros Barreto University Hospital, Belém, Brazil, chiefly complaining of a 1-month rapidly growing swelling on his lower lip. The patient had a 1-year history of a lesion in the lower lip when, in the previous 4 weeks, he noticed a rapidly growing swelling and sought specialized assistance.

The patient had no history of trauma, infection, tumors or prior radiation. His medical history was noncontributory.

Physical examination showed no abnormalities. No lymph node infarction was observed in the head and neck after palpation. Clinically, the lesion exhibited an exophytic and pedunculated nodular appearance, with a verrucous surface and a violet coloration, measuring 3.2 x 2.5 in diameter (Figure 1). No lymph nodes were observed. The patient did not refer pain in the area, and the surrounding mucosa had a regular appearance. An incisional biopsy was performed under local anesthesia, and the histopathological exam revealed tumor islands with enlarged keratinocytes formed by a downgrowth of squamous epithelium with an increased amount of central keratin. The epidermis protruded irregularly and deeply into the dermis. Lymphocyte infiltration in the dermis was also observed (Figure 2). The suggestive diagnosis of KA was made due to the histopathological features. Then, the lesion was excised with a 1-mm margin, and the histopathological exam of the whole lesion led to the diagnosis of KA (Figure 3). No additional surgery was performed to establish a surgical margin because the diagnostic hypothesis was of KA, which led us to make a margin during the surgical procedures. The patient was lost for follow-up. 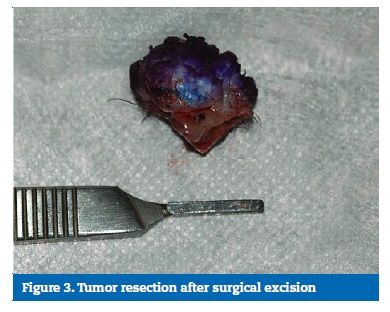 KA was first described by Hutchinson in 1889.8 However, very few case reports and clinical series concerning the clinicopathological features of the head and neck giant KA have been published in the literature. In this study, the authors reviewed all case reports and clinical series dealing with the giant KA of the head and neck region, summarizing the most important aspects found by each author. A search in the Pubmed database revealed 47 cases since 1958, when the first case report on the head and neck giant KA was first published, presenting a 57-year-old male patient with a lesion in the eyebrow region.9

KAs in the head and neck region presenting more than 2 cm in diameter are rare and denominated giant KA. 1, 10 ‑ 11 In our study, we observed that the head and neck giant KA currently presents a mean size of 3.93 cm in diameter. Patients are usually in the sixth and seventh decade of life, with a mean age of 59.1 years old, and are mainly males. 1, 4, 6, 12, 13 Studies have reported that those tumors have a predilection for cosmetically sensitive areas, including the nose and the eyelids. 8, 14 Based on our literature analysis, the nose, the cheek and the lower lip are the locations most commonly affected by the head and neck giant KA.

The histopathological diagnosis of KA is further complicated by its histological similarities with the squamous cell carcinoma. 2, 3, 5 Histopathological features vary with the stage of evolution.3 An early lesion is reported to increase rapidly, generating cell differentiation with a high proliferation index.

The analysis varies according to the atypical mitosis, loss of polarity, individual cell keratinization and hyperchromatic cells of the specimen. 2, 3, 11 It is possibly associated with the time of evolution. The KA is a lesion characterized by a rapid and progressive growth. 4, 6, 11, 15 Our analysis revealed a mean evolution time of 15.1 months, although 73.3% of the cases presented a rapid progression in less than 3 days. Thus, while tumor progression occurs, the degree of cell proliferation increases and, consequently, it becomes increasingly similar to the squamous cell carcinoma. 2, 7 In the case report here presented, the surgical specimen was reviewed carefully, confirming the diagnosis of giant KA.

Numerous treatment methods have been used in patients with giant KA. Due to the tendency of KA to spontaneously regress, the efficiency of some treatments is difficult to evaluate. 5, 7, 12, 14, 16 Only 12.5% of the patients were followed solely by observation, and all of them presented total tumor regression after long follow‑up times. When no type of treatment is employed, there is a risk of the lesion invading adjacent tissues and aesthetic commitment. 2, 7 The non‑surgical treatments mainly used for the regression of the lesion were the intralesional interferon alpha 2 a17 and methotrexate. 6, 18 Taking into account the aggressive biological behavior of the head and neck giant KA, surgical excision was the most used treatment approach (29.1%), followed by combined surgery and radiation (8.3%). All patients showed tumor regression with no signs of recurrence, except in a case report where the treatment employed consisted of electrodesiccation and curettage associated with radiotherapy and bleomycin.19 The notable aggressive behavior of the lesion is confirmed by the occurrence of metastasis. A case of a 61‑year‑old man with lymph nodes, lungs and mediastinal metastasis has previously been reported.2 This aggravation may be associated with the lesion evolution time since the patient sought specialized treatment after 325 months of progression.

The degree of cell proliferation increases during tumor progression and, consequently, there is a greater invasive characteristic, similar to the squamous cell carcinoma. 2, 7 According to our literature review, the mean follow‑ up for the head and neck giant KA is 56.65 months, ranging from 2 to 240 months). This range may be explained by the treatment used since patients who underwent surgical procedures had a shorter treatment time and a fast resolution, 3, 13, 15, 20 - 22 while patients treated with intralesional therapy required multiple injections of the substances, resulting in longer follow‑up times. 6, 11, 17, 23 Typically, KA will recede spontaneously but may recur years later.31,32

In conclusion, according to our literature review, the head and neck giant KA is usually a rapid growth benign tumor with a low propensity for recurrence or metastasis that presents a predilection for male patients, affects mostly the nose and is commonly treated by surgery alone. The case report here presented revealed that tumor excision is an effective treatment and aesthetic principles need to be taken into account to have an optimal treatment and patient satisfaction.

25. Hofer SO, Jackson IT. Self‑involution of giant keratoacanthoma on the tip of the nose. Plastic and reconstructive surgery. 2004;113:765‑6.