A. Sumathi Felicita a   /  Lirin Ann Thomas b

Objectives: To evaluate the overall treatment outcome and undesirable side effects during distal movement of the entire maxillary dentition using mini-implants.

Methods: Seventeen patients older than fifteen years with a mild-to-moderate arch length/tooth size discrepancy were selected. Leveling and aligning were done with 0.018” x 0.025” passive stainless-steel wire in a 0.022 slot. A 1.2 x 8 mm mini-implant was placed bilaterally at the mucogingival junction between the maxillary second premolar and the maxillary first permanent molar. A 200-gram distalizing force was applied. Lateral cephalograms and dental casts were taken prior to distal movement of the maxillary dentition and six months later. Dental casts were assessed using CAD-CAM software. The Wilcoxon signed-rank test was performed.

Results: Intrusion of the entire maxillary arch with decreased lower anterior facial height and facial proportion index was noted. The average extent of molar distalization achieved was 1.7 mm, at the rate of 0.29 mm/month. Distal tipping of the maxillary molars by 3.8° and retraction of the maxillary central incisors by 2.3° were observed. No undesirable side effects occurred, such as incisor flaring, extrusion of the molars, or bite opening. Root resorption was present in most cases.

Conclusions: The overall treatment outcome of distal movement of the maxillary dentition was good. This method is beneficial for patients with mild/moderate arch length/tooth size discrepancy, especially Class II cases, vertical growers, and patients with end on molar relation. Mild root resorption was noted in the maxillary anterior teeth.

Although the mini-implant has been used as an absolute anchorage during space closure to treat malocclusion with a high-anchorage demand,1 - 5 distal movement of the entire dentition with mini-implants has not been studied extensively. The distal movement of the maxillary dentition using mini-implants involves retraction of all the teeth in the maxillary or mandibular arch and may be a preferred method for retraction of anterior teeth in patients with mild arch length/tooth size discrepancy as compared to inter-proximal reduction or second premolar extraction.

Therefore, the present study proposed to evaluate the overall treatment outcome and side effects during distal movement of the maxillary dentition using mini-implants on a thicker wire: 0.018” x 0.025” stainless steel in a 0.022” slot. This study is unique as there is no published literature on distalization mechanics using the given arch wire/bracket slot combination.

This study was approved by the scientific review board and further reviewed by the ethical board. The sample consisted of 17 patients meeting the inclusion and exclusion criteria (Table 1). The inclusion criteria were: more than 15 years of age; mild-to-moderate arch length/tooth size discrepancy; full complement of teeth excluding the third molars; initial leveling and aligning phase of orthodontic treatment; no history of temporomandibular joint problems. The exclusion criteria were: <15 years of age; gross vertical discrepancy; severe skeletal Class II or Class III malocclusion; medically compromised; periodontally compromised; previous orthodontic treatment.

Table 1. Baseline data of the participants

Based on earlier literature,14 the power was calculated to be 97% for 16 patients to evaluate the amount of distal movement of the maxillary first permanent molar and the treatment outcome. The effect size was 0.934. After a detailed explanation of the procedure, written informed consent to perform the treatment and publish the images and the relevant findings of the study was obtained from all patients who matched the inclusion criteria and agreed to participate. Eighteen patients were selected for the study to compensate for dropouts. One patient dropped out during the study due to various reasons.

Of the 17 patients, six had an Angle’s Class I molar relation, five had an end on molar relation, and six had an end on one side and an Angle’s Class I on the other side on a Class I skeletal base. Since each patient required a different amount of tooth movement, the amount of distalization during six months was evaluated. Patients with an Angle’s Class I molar relation had a concomitant distal movement of the mandibular dentition. Distalization was carried out in both the upper and lower arch in these patients to correct the proclination of the maxillary and mandibular anterior teeth. These cases did not warrant extracting the premolars for gaining space.

An intraoral peri-apical radiograph was taken to check the mini-implants’ position. A distalizing force of 200 grams was applied bilaterally with pre-calibrated NiTi coil springs placed from the mini-implants to the crimpable hooks between the lateral incisor and the canine on both sides (Figure 1). The patient was reviewed periodically once every 3 weeks for 6 months. Post-distalization records, namely extraoral and intraoral photographs, study models, and lateral cephalogram, were taken (T2). 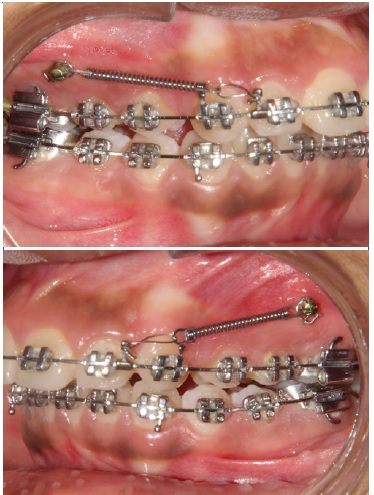 Figure 1. Distalization of the entire maxillary arch with buccal mini-implants placed between the maxillary second premolar and the maxillary first permanent molar. 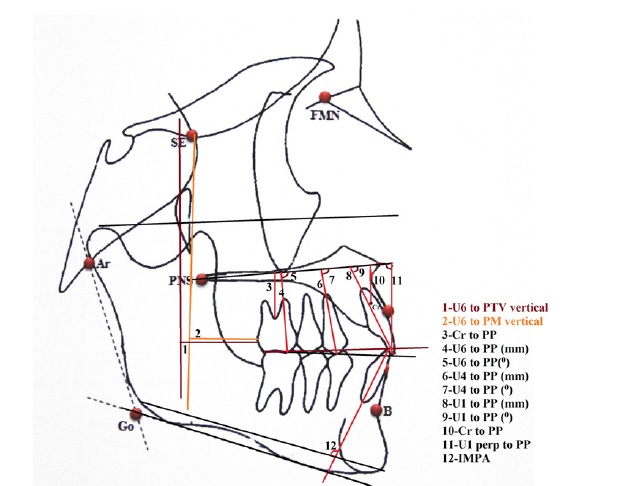 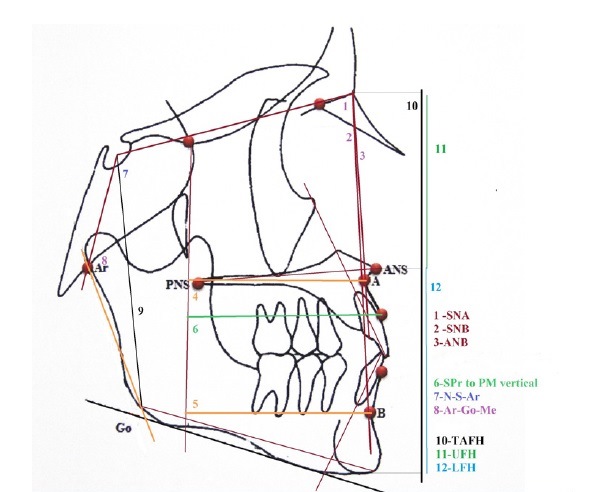 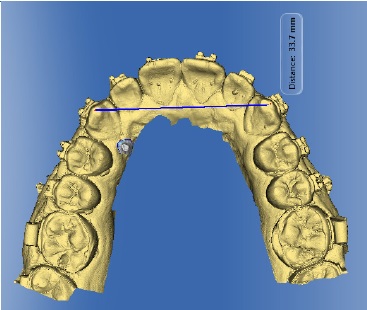 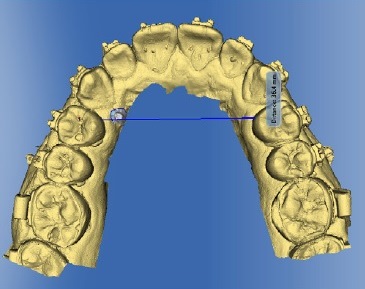 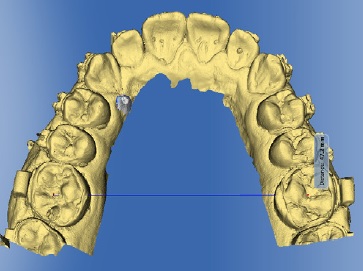 The various parameters were measured and entered in a proforma sheet. The values obtained were subjected to statistical evaluation. The non-parametric Wilcoxon signed-rank test was done to evaluate treatment changes within the group using the SPSS version 20 software as the sample size was small. The level of significance was evaluated at a 95% confidence interval with p≤0.05. One week after the initial evaluation, five radiographs were retraced in each group by the same investigator. The intra-operator error was assessed using Cohen’s kappa coefficient.

The results obtained from the statistical evaluation are in Tables 1-5. There was no intra-operator error (the value of kappa was 0.9).

The mean age of the patients was 21 + 3.1 years in males and 18 + 3.0 years in females. The patients included in the study tended toward skeletal Class II malocclusion and horizontal growth pattern (Table 1). 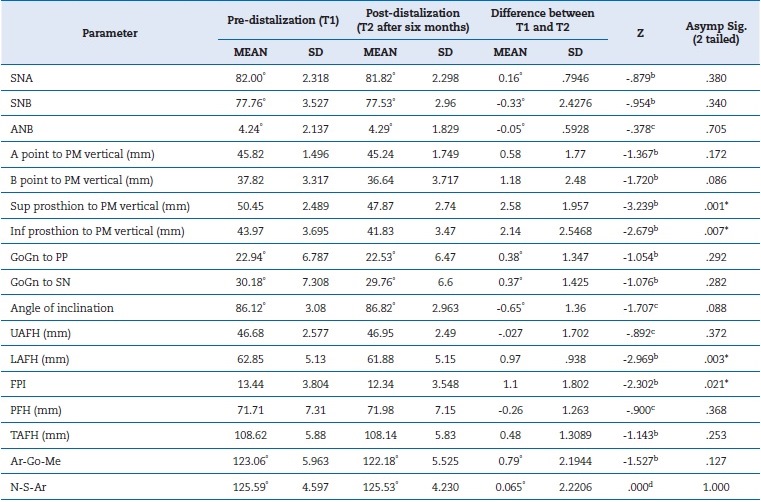 b. Based on positive ranks

c. Based on negative ranks

d. The sum of negative ranks equals the sum of positive ranks

Dental evaluation (Table 3) showed significant intrusion of the entire maxillary dentition. There was a significant retraction of the maxillary anterior teeth. Significant distal tipping of the maxillary first permanent molar by 3.88° was noted. The right and left maxillary first permanent molars were evaluated separately to determine the effect of distalization on each molar individually, and their extent of distal movement was almost similar: 1.71 ± 1.687 mm and 1.77 ± 1.48 mm with p=0.004 and p=0.007, respectively. The inter-incisal angle increased. There was a slight clockwise rotation of the maxillary occlusal plane and a marginal decrease in the incisor mandibular plane angle. A significant reduction in overjet occurred. 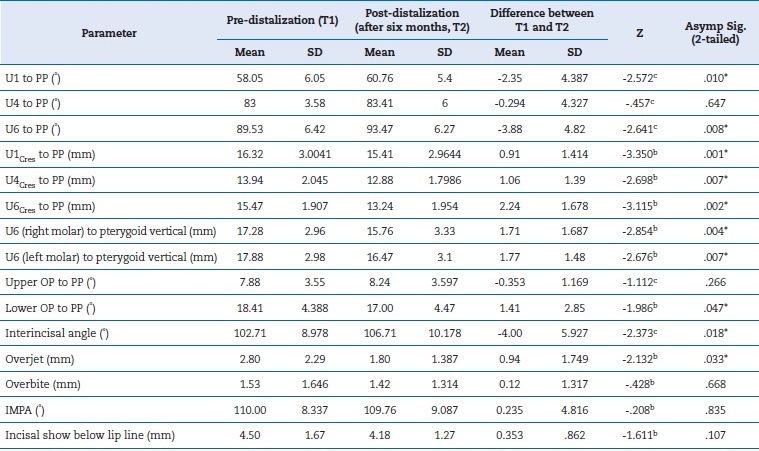 The cephalometric evaluation of soft tissue (Table 4) revealed a significant change in the position of the upper and lower lips. Root resorption was noted in the anterior teeth, with most cases showing irregular root outlines.

The effect of treatment mechanics on the maxillary arch measured in the transverse plane showed no statistically significant change in inter-canine and inter-premolar width. The inter-molar width increased by 0.38 mm, which was statistically significant (Table 5). The rate of molar distalization achieved on each side was 0.29 mm per month. The incisors retracted 0.39° per month.

Distal movement of the maxillary dentition can be considered in cases of borderline skeletal Class II malocclusion with an end on molar relation to achieve a Class I molar relation and concomitantly correct the axial inclination of anterior teeth. It is also indicated in bimaxillary prognathism with mild proclination of the maxillary and mandibular anterior teeth in patients not willing to undergo orthognathic surgery.

The quality of bone may not be satisfactory in younger patients, resulting in failure of the mini-implant.18, 19 The mean age of the patients included in the study was 19.06 years + 3.2 months.

Despite these precautions, root resorption was noted during treatment. This problem may be minimized by reducing the magnitude of applied force or increasing the time between activation.

The mini-implant site,21 diameter,22, 23 and placement angulation13, 24 were determined considering that the entire maxillary dentition moves upon application of the distalizing force, and the resulting root proximity may result in mini-implant failure. The average success rate of the mini-implant was 82%, and six mini-implants were re-positioned throughout the treatment.

The extent of intrusion from anterior to posterior increased gradually, probably due to the posterior location of the mini-implant. If the direction of force application passes through the center of resistance of the maxillary dentition, only intrusion and distalization of dentition will occur. Otherwise, rotational forces should be anticipated.

Evaluation of the soft tissue showed a change in the position of the upper and lower lips at the end of treatment with improvement in profile. In the transverse plane, no significant change in inter-canine and inter-premolar width was noted. Mild expansion of about 0.38 mm was noted in the molar region.

The rate of molar distalization was around 0.29 mm per month and the rate of retraction of maxillary anterior teeth was 0.39°. The results showed no skeletal change, but the patient was evaluated for only six months.

The extent of distalization was comparable with that of Park HS, 20 greater than that of Bechtold et al., 12 and less than that of Yamada et al..14 However, the extent of molar intrusion in the current study was greater than the latter study14 and may be due to a rigid arch wire and a better bracket-arch wire fit. All the above studies had a longer treatment duration than the current study.

Molar distalization with the skeletal anchorage system using bone plates was about 3.3 to 3.5 mm greater with slight distal tipping of teeth.7, 8 However, the bone plate placement is a very invasive procedure compared to the mini-implant placement and must be contemplated with care.

The overall treatment outcome of the maxillary dentition distalization on 0.018 x 0.25” stainless-steel wire in a 0.022 slot was good. Mild root resorption was noted in the maxillary anterior teeth. This method can be applied in cases with a mild-to-moderate arch length/tooth size discrepancy, especially Class II cases. It is beneficial in patients who require intrusion of the maxillary dentition, vertical growers requiring a reduction in the lower anterior facial height, and those with end on molar relation.

1 Ali Aljhani, Khalid H. Zawawi. The use of mini-implants in en masse retraction for the treatment of bimaxillary dentoalveolar protrusion. Saudi Dent J. 2010;22,35-9.

18 Miyawaki, S. Factors associated with the stability of titanium screws placed in the posterior region for orthodontic anchorage. Am J Orthod Dentofac Orthop. 2003,124:373-8.

Protection of human and animal subjects. The authors declare that the procedures followed were in accordance with the regulations of the relevant clinical research ethics committee and with those of the Code of Ethics of the World Medical Association (Declaration of Helsinki).

Confidentiality of data. The authors declare that they have followed their work center protocols on access to patient data and for its publication.

This is an open access article under the CC BY-NC-ND license (http://creativecommons.org/licenses/by-nc-nd/4.0/).