Objectives: Consensus has not been reached regarding the diagnosis of bruxism. The present study analyzed the agreement between two self-reporting questionnaires for the diagnosis of possible bruxism.

Methods: A non-probabilistic consecutive sample was selected among adult patients treated with implant-supported fixed prosthesis from 2010 to 2016. The sample consisted of 65 patients (42 women) undergoing oral rehabilitation with fixed implant-supported prostheses, who answered two structured questionnaires (Q1 and Q2) for the diagnosis of bruxism. Data were tested for agreement between both questionnaires using the Cohen’s kappa coefficient.

Conclusion: The results suggest that, although the use of self-reporting questionnaires for bruxism is a clinically easy method to apply in research and dental practice, this method presents limitations for obtaining a precise diagnosis of possible bruxism.

Bruxism is a repetitive muscle activity characterized by the grinding and/or clenching of the teeth when awake or sleeping.1 Sleep bruxism is an unconscious activity of grinding and/or tightening the teeth while the individual is sleeping, while diurnal bruxism is a semi-voluntary activity of the mandible characterized by the act of clenching both dental arches.1, 2, 3 Bruxism is considered a potential factor of temporomandibular disorders, muscle pain, dental wear, failure of restorations and dental prostheses, and loss of periodontal support.1 In addition, excessive occlusalload has been suggested to lead to peri-implant bone loss or even failure of dental implants and increased rates of complications.3

It is still controversial whether bruxism should be categorized as a habit, a disorder, or a risk factor for other disorders. Although an international consensus on the subject was published in 2013,1 other authors argue that there is insufficient evidence supporting the notion that bruxism is a disease per se or a risk factor for other disorders.4 The prevalence of bruxism is also unclear, but it is believed to be present in 6%-20% of the general population, affecting 14%-20% of children under 11 years, 5%-8% of the adult population,7 and as low as 3% of individuals over 60 years,8 thus showing a decreasing trend over time.

However, these methods also have their limitations, including the necessity for the patient to leave their habitual environment and spend the night in sleep laboratories.10 On the other hand, the use of portable devices does not allow simultaneous audio-video recordings, thus causing bruxism to be confused with other orofacial activities (sighs, cough, speech).8

On clinical examination, the presence of tooth wear may indicate that the patient suffers from bruxism.8, 9 Such wear and tear must be differentiated from that of individuals with other harmful habits and/or excessively acidic diets. Although dental wear may aid in the clinical diagnosis of bruxism, it is usually considered a secondary factor.9 Itmay indicate that the patient has a history of bruxism but not necessarily that they currently suffer from bruxism. Also, about 40% of the population without bruxism developdental wear and tear over time.11 Hypertrophy of the masseter muscle can also be considered a secondary factor and should be differentiated from inflammatory edema, tumors, and other syndromes.8

This cross-sectional and correlational study used a database derived from two clinical research projects on implant-supported prostheses, which were approved by the institutional ethics committee of the Pontifical Catholic University of Rio Grande do Sul, in Porto Alegre, Brazil, and registered in a National System of Information on Ethics for  Researchin Humans.

The non-probabilistic consecutive sample was selected among adult patients treated from 2010 to 2016. Data from 65 adult patients (42 women) were obtained from the database and used for this study. Bruxism data were collected using two self-reporting questionnaires on bruxism (Figures 1 and 2). 2, 12 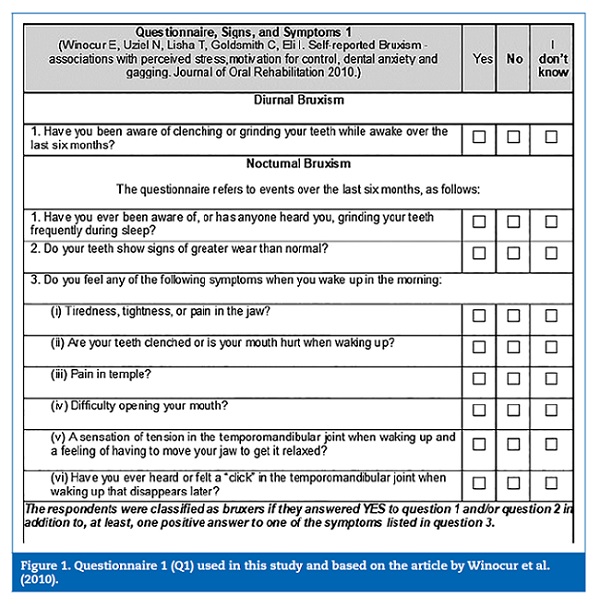 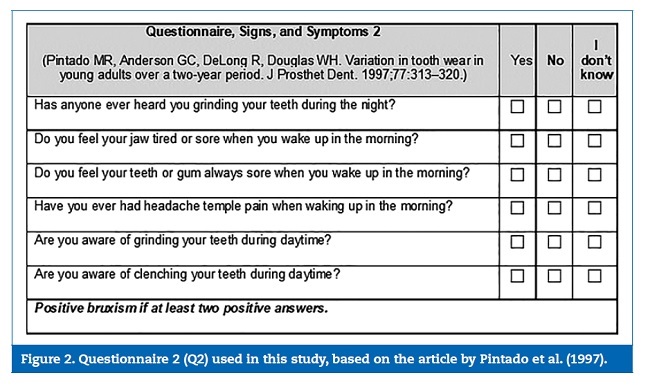 The agreement between the questionnaires for a positive diagnosis of bruxism using the Cohen’s kappa coefficient (Tables 2 and 3) was 0.356.

The two self-reporting questionnaires on bruxism analyzed in this study showed a fair-to-low agreement. The questionnaires presented a higher agreement for the absence than for the presence of bruxism. Only six out of 65 patients (9%) had a positive diagnosis of bruxism in both questionnaires. Similarly, it has been reported that 6 to 20% of the general population is estimated to have bruxism.7

It was surprising that the two tested questionnaires with similar questions raised such a low agreement. A different understanding of the questions or lack of attention may have potentially influenced individual responses. One of the questions asked whether someone had already reported hearing the patient grinding their teeth, but this information may not be available for patients who sleep alone or cannot ask another person. Another limiting factor of this type of methodology is the individual’s perception of the symptoms, since waking up with a headache may be associated with other pathologies and, in addition, such symptoms may already be part of the patient’s routine.8

An international consensus has proposed bruxism to be classified as “possible,” “probable,” or “definitive,” and self-reported bruxism to be considered as a “possible” diagnosis of bruxism.1 Although the self-reporting questionnaire is a practical instrument for large-scale studies, its subjective nature carries the risk of overestimating or underestimating the presence of bruxism. 1, 4 However, most studies on bruxism and temporomandibulardisorders have used this method. 15, 17

In a meta-analysis18 conducted to validate different forms of diagnosing sleep bruxism – questionnaires, clinical assessment and portable diagnostic devices, these three methods were compared to the reference standard method polysomnography.

Based on the available evidence at the time, that meta- analysis concluded that questionnaires and clinical assessment could be used as screening methods to identify a negative diagnosis of sleep bruxism but were not that good in identifying a positive one. Despite not being very recent, the following diagnostic criteria for sleep bruxism of the American Academy of Sleep Medicine19 are still very much cited: a) the patient has a complaint of tooth-grinding or tooth-clenching during sleep; b) one or more of the following occurs: abnormal wear of the teeth, sounds associated with bruxism and/or jaw muscle discomfort; c) polysomnographicmonitoring demonstrates both of the following: jaw muscle activity during the sleep period and absence of associated epileptic activity; d) no other medical or mental disorders (e.g., sleep-related epilepsy, accounts for the abnormal movements during sleep); e) other sleep disorders (e.g., obstructive sleep apnea syndrome, can be present concurrently). The minimal criteria for a positive diagnosis of bruxism isA plus B.

Because of its multifactorial nature, bruxism may frequently appear in a patient’s daily life, and a longer follow-up of the case is considered important. Accordingly, some studies have suggested the use of an interview instead of a questionnaire, as the first provides more complex responses, and a sleep diary, which can be useful for assessing individual cases and the corresponding treatment.17 Enquiringthe patient about the presence or absence of tooth wear does not seem reliable. Currently, approximately 40% of the population without bruxism shows similar wear patterns, thus indicating a history of bruxism. 8, 11 Also, this wear only differs between people with and without bruxism after two years.2

For a “probable” diagnosis of bruxism to be obtained,1 besides conducting a clinical examination, it is necessary to apply an easy-to-understand questionnaire that will reach the population homogeneously and has few questions or even only one question requiring a categorical yes/no response. This way, it is possible to identify a patient with bruxism more promptly without the need for tests that require more time and increased patient availability, such as the polysomnography.15 In addition, the polysomnographypresents several methodological limitations.

When evaluating both the questionnaires and the findings of this study, some questions may be considered as having higher “possible” diagnostic value for bruxism. Among them is the  question of whether the patient remembered feeling orofacialmuscle fatigue upon waking up and whether they were aware of grinding or clenching their teeth during the day or while sleeping. Regarding the first question, since bruxism is characterized by an involuntary movement of the mandible caused by contractions of the masticatory muscles, it is believed that there would be painful sensitivity in the masseter region and difficulty opening the mouth upon awakening.3 However, masseter muscle hypertrophy should be differentiated from inflammatory edema, tumors, and other syndromes,8 which should be discarded during the anamnesis. The second question is frequently found in self-report questionnaires of bruxism since noise production during sleep is a common sign of bruxism.

However, the response to this question may be compromised in cases where the patient sleeps alone or removes the prosthesis to sleep, or where their partner is a deep sleeper.8

The two self-reporting questionnaires analyzed showed fairto-low agreement, which indicates limitations in their use to diagnose “possible” bruxism. Although questionnaires are a simple and easy method to apply in research and dental practice, the outcome depends heavily on the understanding and truthfulness of the patient in answering the questions. Further research is required to refine self-reported bruxism questionnaires to attain a simple and more predictable method to diagnose“possible” bruxism.

Protection of human and animal subjects. The authors declare that the procedures followed were in accordance with the regulations of the relevant clinical research ethics committee and with those of the Code of Ethics of the World Medical Association (Declaration of Helsinki).

Supplementary content Supplementary data associated with this article can be found, in the online version, at http://doi.org/10.24873/j.rpemd.2018.06.219